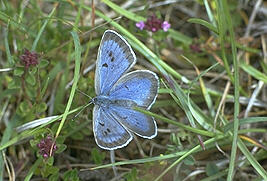 This interesting species has unfortunately decreased drastically and is now gone from most of its localities in Denmark. It has been known from about 50 places, but stable population only from around 20 localities. Today we only find the species in 2 places: On the island Møn and in northern Jutland. Of these populations, only the one on Møn is stable and secured by habitat conservation and management.

Habitats are either natural heathlands or abandoned cultivated fields, where P. arion could establish populations for a shorter period. In such cases it often appeared in huge numbers.

The reasons for the drastic decline are in most cases unknown due to lack of exact data on foodplants and host ant (Myrmica sabuleti). However, in some cases building of summerhouses, planting of pine (Pinus) and spruce (Picea) are clear reasons. Many of the former localities looks exactly the same as earlier with plenty of foodplant (Thymus) and host ant. Maybe some change in climat is the reason.

Today the locality on Møn is protected and managed by cutting and moving hay, and the population there has for 5 years been small but very stable. Suprisingly, it uses Marjoram (Origanum) as alternative foodplants, making the future even safer.

Distribution map for P. arion in Denmark based on specimens in Danish collections and observations. Data collected by Atlas Project Danish Butterflies

Continue to next species.